The great Alaska earthquake occurred on March 27, 1964 at 5:36 pm. It was the second largest earthquake of the 20th Century. The earthquake's magnitude was 9.2 on the moment magnitude scale. 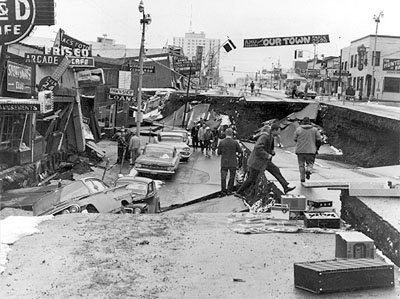 The Alaska earthquake epicenter was in Prince William Sound a region in Alaska approximately 120 km east of Anchorage. It was the second largest earthquake of the 20th Century. Very few people lived in the area and it happened on Good Friday, a holiday in Alaska, after the schools were closed and most people had gone home.

The Pacific Plate in this region is moving to the northwest at about 5 to 7 km per year relative to the North American Plate. The plates became locked and pressure built up. The land crumpled as the pressure built raising some areas depressing other parts of the land.

Latouche Island moved 18 meters to the southeast when the rocks fractured. Montague Island was uplifted between 4 and 9 meters. The town of Portage dropped down approximately 9 meters and was abandoned after the earthquake.

Over 100,000 square miles of land was effected by the earthquake. The Pacific plate moved an average 9 meters beneath the North American plate.

Most of the people killed by the tsunamis lived in Alaska. It has estimated that 106 people died when landslides and ocean floor generated tsunamis swept ashore destroying villages and killing people.