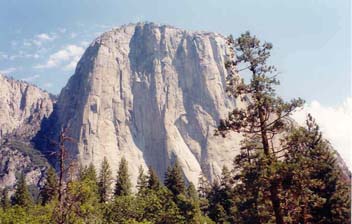 Molten rock (magma) collects in magma chambers beneath the Earth's surface in subduction zones when an oceanic plate subducts beneath another crustal plate. The oceanic plate begins to melt as it moves downward beneath the overriding plate.

The melting rock collects in a series of magma chambers along the width of the subducting plate. Most of the magma moves upward where it erupts on the Earth's surface during a volcanic eruption. Sometimes the molten rock cools and crystallizes in a magma chamber when a subduction zone is no longer active.

Plutons are areas where molten rock in the magma chambers cooled and crystallized into a large intrusive body of solid rock. The igneous rocks that form from these intrusions depend on the composition of the rocks in each area.

Plutons resemble an upside down teardrop. They form a number of different landforms based on their shape and size including batholiths and laccoliths.

The largest size plutonic rock formations are batholiths. They are more than 40 square miles in size on their upper surface. Batholiths form when  multiple intrusions of magma create plutons that crystallize in former subduction zones in arc below volcanoes.

Batholiths are irregularly shaped formations that form mountain ranges on the Earth's surface when the rocks are exposed by erosion.

Scientists at one time thought batholiths were so large that they reached to the base of the crust. Recent studies indicate that batholiths are only 20 to 30 km thick but can stretch more than 1000 km in length.

Today, batholiths cover large areas of the Earth's surface. The mechanisms that bring these great bodies of rock to the surface are still not fully understood.

The largest know batholith in North America is the coast range of southern Alaska, British Columbia and Washington. The batholith is 1500 km long. The Idaho batholith, Sierra Nevada batholith and the Southern California batholith are the largest batholiths located entirely in the United States.

The Black Hills of South Dakota where Mount Rushmore is located is another large batholith. It contains the images of four United States Presidents carved into the face of the mountain.

All these batholiths contain plutonic rocks that formed deep underground and are part of the rock cycle.