Interesting facts about Earth are being discovered every day by scientists studying our planet. Earth is the third "rock" from the Sun, which means that the four inner planets are rocky planets while the outer planets are gas giants.  Mercury, Venus and Mars are the other three rocky planets. The other rocky planets do not have large amounts of water and the outer surface is basalt rock.

We call Earth the blue planet because approximately two thirds of our planet is covered with water. Clouds creates the illusion that Earth is a predominately a blue planet with a covering of white that might be snow outer space. Instead our rocky planet has three major groups of rocks that cover the Earth's surface. The three major groups of rocks are igneous rocks, metamorphic rocks and sedimentary rocks. 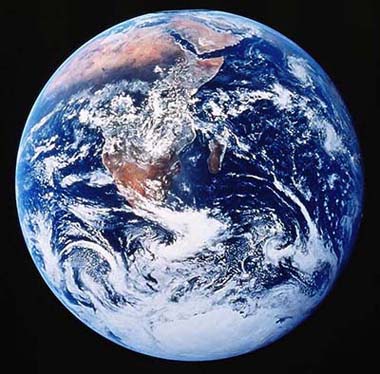 The outer layer of the Earth's crust is primarily basalt and granite. Basalt covers the ocean floors. It forms where crustal plates are separating allowing magma (molten rock) from the mantle to flow out on the surface of the Earth forming pillow basalt. Pillow basalt covers the ocean floors forming the longest chain of mountains on Earth. Basalt is a heavy rock that contains iron-rich minerals.

Scientists have discovered new facts about Earth that explain how South America and Africa are moving apart at the Mid Atlantic Ridge.  People looking at South America and Africa on maps or globes have often thought the two continents looked like they fit together like pieces of a puzzle. Scientists until the middle of the last century did not believe it was possible for the two continents to have fit together in the past.

Theory of Plate Tectonics explains how these two continents once were together and are now slowly separating at about the rate our fingernails grow. Seafloor spreading discovered in the 1950s explained how the continents were able to move apart.

We also know that our ocean floors are much younger than the continents because new ocean floor is being created constantly. Global mid-ocean ridge system is a great mountain chain runs through all the oceans on Earth like the seams on a baseball.

If all the water on Earth dried up the most prominent feature on our planet would be the global mid ocean ridge system. Iceland and sits on top of a hot spot and the Mid-Atlantic Ridge that runs down the center of the Atlantic Ocean.

The outer layer of Planet Earth is the lithosphere which is a solid layer. It consists of the continental crust, oceanic crust and upper mantle. The crustal plates move around the Earth on the asthenosphere. This layer has often been described as resembling silly putty. It can flow like a liquid and can break apart like a solid.

Find out how scientists use these facts to discovered the boundary between the crust and the mantle. They also used earthquake waves when they discovered the outer and inner cores of our planet.