The Rock Cycle is
Nature's Recycler

The rock cycle is the method that natural forces change rocks from one group to another. The three major rock families are igneous rocks, sedimentary rocks and metamorphic rocks.

There are 92 naturally occurring elements and over 3,500 different identified minerals. These elements and minerals are the building blocks of rocks. Different processes create each of these families of rocks. 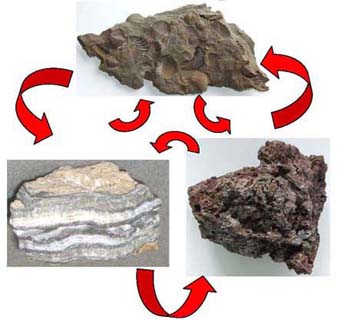 All igneous rocks were at one time molten rock material that cooled and solidified. Only the outer core is molten inside the Earth. The mantle and crust are solid except for places where rocks melt and collect in magma chambers.

Liquid rock material collects where crustal plates are separating. Basalt flows out of these fissures onto the ocean floor and cover 70% of the Earth. Flood basalts are huge outpourings of basalt that occur on land.

Subduction zones and hot spots are also places where igneous rocks form. The rocks in these areas form a variety of igneous rocks including andesite, dacite and rhyolite. Rhyolite is the most explosive of these lavas and is associated with super volcano eruptions.

Sedimentary rocks form when older rocks are broken down and carried to new areas by weathering erosion, transportation and deposition where they turn to stone (lithify) .

Clastic sedimentary rocks form when bits and pieces of boulders break off and are carried away by streams into the oceans where the layers of sediment collect.

Organic sedimentary rocks form when plant and animal material turns to stone. Coal and limestone reefs are examples of this type of rock in the rock cycle.

The Himalaya Mountains formed when the Indian and Eurasian Plates collided. Even today the mountains are slowly growing taller as the land between two colliding plates is compressed.

The minerals in the rocks between the two plates recrystallize into new minerals that are stable at higher temperatures and pressures. As the rocks recrystallize they form new metamorphic rocks including gneiss, slate, marble and quartzite.