These earthquake facts explain how and why earthquakes occur. Earthquakes are primarily caused by tectonic plate movements. Crustal plates moving apart, smashing together or slipping past each other horizontally cause an earthquake. The earthquake is caused by stress building up in rocks until they break sending seismic waves in all directions. 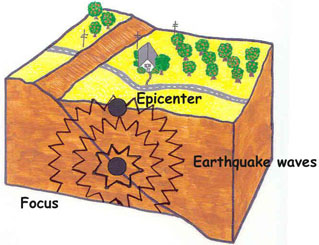 The exact location of an earthquake is determined by three reporting station using seismographs. P waves travel faster than S waves. Seismologists use the difference in time that it takes the P wave and S waves to reach a reporting station to determine how far away the earthquake was when the rocks ruptured.

Epicenter and focus of earthquakes.