The Sierra Nevada Batholith includes Yosemite Park. It began to develop when subduction zones formed as an oceanic plate subducted beneath the eastern edge of the North American Plate.  The oceanic plate began to melt as it descended into the crust and upper mantle.

The molten rock (magma) formed hundreds of plutons above the area where the plate was melting. Plutons are teardrop shaped areas where the magma collected and cooled forming a large area of granite. Some of the magma worked its way upward and erupted onto the Earth's surface during volcanic eruptions. 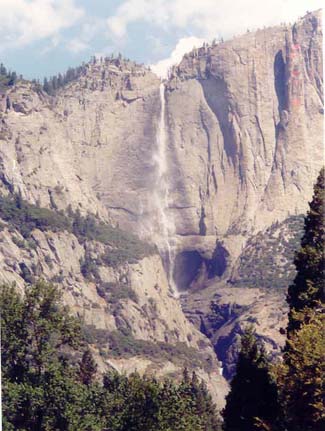 The plutons were deep underground when they cooled and hardened. Over a long period of time tectonic forces on the surface of the Earth created the Basin and Range province and forced the Sierra Nevada Batholith upward.

The batholith includes all of the hundreds of plutons that formed in the area where the batholith is located.  As the batholith was uplifted erosion increased exposing the granite in the plutons as the overlying layers of rock eroded away. The mountains are not a single piece of granite but instead are made up of individual rocks that formed as each pluton cooled. Most of the rocks that make up the batholith have not been uncovered by erosion yet.

Cracks in the granite allowed rainwater to seep beneath the boulders surface. Expansion and contraction of the rainwater due to freezing and thawing caused pieces of rock to break off. This produced the jagged snow covered peaks found at the summit of the Sierra Nevada Mountains. Mount Whitney is the highest peak in the Sierra Nevada Mountains and the continental United States.

Yosemite National Park lies within the Sierra Nevada Batholith. Granite lies underneath almost all of the 1,169 square miles of the park. Yosemite has many natural wonders including hanging valleys, waterfalls, U-shaped valleys, polished domes and cirque lakes.

The geologic features all formed over eons of time as glaciers covered the area and retreated many times. The glaciers left behind the spectacular scenery found in the park including Yosemite Falls. Yosemite Falls is 2,245 feet high and is the tallest waterfall in North America.