NASA’s robotic space craft LADEE was launched toward the moon to begin a six month journey of exploration on September 6, 2013. The space capsule named the Lunar Atmosphere and Dust Environment Explorer (LADEE) is pronounced LA’dee. The space craft is about the size of a small car and weighs 844 pounds. It carries three scientific instruments that will measure the very thin atmosphere on the moon. The space ship also carries a revolutionary new laser communication system that will be tested during the mission. 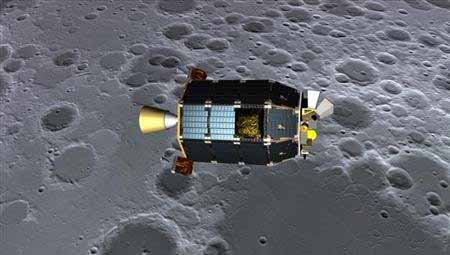 The space craft LADEE is studying the dust on the Moon. NASA

The explorer spacecraft rocketed into space aboard an unmanned Minotaur rocket from the Wallops Flight Facility. The facility is located on Virginia’s Eastern Shore. This was the first rocket launched into deep space from Virginia. All previous launches from this facility were confined to Earth orbits. The Minotaur V rocket was made of converted intercontinental ballistic missile motors belonging to the Air Force.

All previous moon missions since 1959 launched from Cape Canaveral, Florida except for one. That rocket was launched from California in1994. The Apollo Moon missions all took three days to arrive at the moon. The LADEE will take a full month. It is circling the Earth three times in a long elliptical orbit that get further from the Earth with each orbit when it will be pulled into the moon’s gravity and orbit the moon for another five months.

The LADEE’s mission is expected to last six months. It will be studying the gases in the moon’s thin atmosphere. The moon’s atmosphere contains argon, helium, sodium, potassium and other elements. Scientists hope to figure out how water became trapped in the frozen poles on the moon. Decades ago astronauts reported dust rising from surface of the moon. Part of the mission of the spacecraft is to look at this phenomenon.

Aboard the spacecraft is a new laser communications system that researchers hope will revolutionize the way they communicate with spacecraft in deep space. The traditional method of communication is with radio waves which take longer and more power to send and receive communications.