Trying to save birds lives that are flying into windows has become the full time research effort of two scientists David Klem and Christine Sheppard. They would like to figure out how windows could be designed so the patterns in the window are invisible to people but birds could see them.

David Klem started trying to find ways to stop bird collision when he was a graduate student in 1974. He was resting outside a window when he saw a mourning dove fly into the window so hard some of its feather scattered and it died. Since that day almost 4 decades ago he has been researching ways to stop the birds from flying into windows. 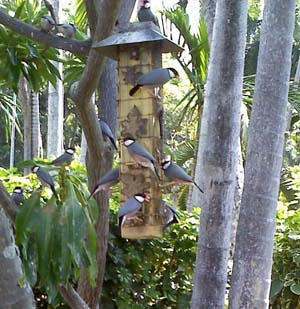 Birds in Hawaii at a feeder
Photo by Myrna Martin

People have wondered why birds fly into windows for almost a century. A 1931 scientific report on the yellow-billed cuckoo crashes stated that the deceased birds are “rare, self-destroying incompetents.” After World War II the building boom created more and more building with picture windows and glass walls. The number of birds that died from crashing into windows surged. Klems slogan after 40 years of research is “it’s the glass, stupid.”

Christine Sheppard has worked at the Wildlife Conservation Society’s Bronx Zoo for over two decades. She found that when they had a new bird that did not know its way around an exhibit covered with glass she would soap the windows until the birds knew its way around the enclosure. After that the windows were washed off the bird flew safely around its enclosure.

Today Kelm and Sheppard are trying to find ways to protect the birds while not destroying the view of people in glass walled building or with large expanses of picture windows. Research into different types of window glass has not proven to be useful at this time.

Things that DO NOT seem to help reduce the number of birds flying into windows: