This volcano experiment is fun and easy to do. In this experiment you will be using a small film canister as the throat of the volcano. The lid of the canister represents cooled igneous rocks covering up the molten rock in the throat of a volcano. Be sure and stay 8-10 feet (3 meters) away from the canister to observe your eruption. 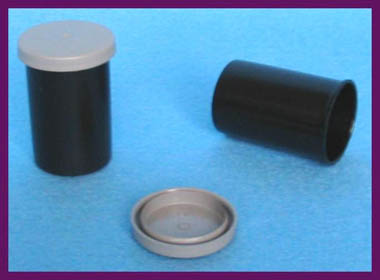 Eruptions on Kilauea volcano in Hawaii are fueled by expanding gases that forces the molten rock out of vents on the volcano. The lava has a low-viscosity and therefore often creates rivers of molten rock. These rivers sometimes create lava tubes that turn into lava caves when the eruption is over.

Dacite and rhyolite magmas are thick and viscous with a high percentage of quartz. The high quartz content in the magma does not allow gases to escape easily. The dacite dome growing in the caldera of Mount Saint Helens is one million times more viscous than the lava that flows out of Kilauea volcano.

Dacite and rhyolite magmas are so viscous the gases cannot escape as they near the Earth's surface. Pressure builds up until there is a violent eruption. Some eruptions will literally blow the top off of a volcano.

Great eruptions of the 20th Century