The 1960 chile earthquake was generated when rocks in a subduction zone became locked. The Nazca Plate is a small oceanic plate that is moving eastward toward the continent of South America. The South American Place is moving westward due to the Mid-Atlantic Ridge as it separates. 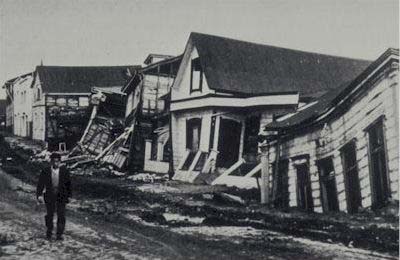 The Nazca Plate and North American Plate are separated by a fault zone that lies be the two plates. The heavier oceanic Nazca Plate has been forced to bend as it moves downward toward the mantle in this subduction zone. A deep ocean trench lies between the two plates on the ocean floor where the two plates meet.

As the South American Plate crumpled some of the land to lift upward creating small hills while other parts of the land drop down forming valleys. Eventually the rocks rupture releasing all the energy in the rocks which travel around the Earth as seismic waves.

Foreshocks occurred as the rocks began to break along the fault line. They are a precursor to a major earthquake. The people living in the area knew to run outside where it was safe prior to the megathrust earthquake.

The megathrust earthquake produced by the rupturing rocks allowed the North American Plate to override the Nazca Plate. Some of the land rose immediately while other areas that had form small hills dropped down several feet.

The tsunami waves generated by the ocean floor movement sent tsunami waves traveling around the Pacific Ocean at speeds that jet planes travel. In Hilo, Hawaii 61 people died and most of the town was destroyed. There were no tsunami warning sirens at that time to warn the residents that the killer waves would hit their shore.