The earthquake epicenter is a point on the Earth's surface directly above an earthquake. Scientists determine the epicenter by studying the P waves and S waves produced by all earthquakes.

P waves are compression waves and travel faster through the Earth than S waves. S waves are transverse waves that travel in a wavy motion similar to moving a jump rope back and forth in the air. 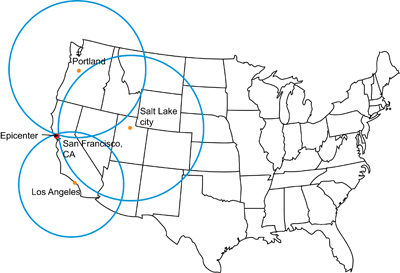 The P waves and S waves are recorded on seismographs. Scientists use the difference in arrival times between the two sets of waves to determine the distance the where the rocks fractured at the beginning of the earthquake. Seismologists draw circles around the location of each reporting station. They use the time travel difference between the P waves and S waves to determine how far away the earthquake's focus is from each reporting station with a seismograph.

It is important to people hearing the reports of a major earthquake to know approximately where the earthquake is located. Scientists know  people can get a better understanding where an earthquake occurred if they give the information relative to towns and cities in an area.

The October 1989 earthquake which took place during a World Series Baseball game epicenter was not in San Francisco where so much damage occurred. Instead the epicenter was near Loma Prieta, a peak in the Santa Cruz mountains. A distance of 10 miles to the city of Santa Cruz.

The focus of the earthquake was 11 miles beneath the Earth's surface and was a thrust fault. This means that the fault rupture did not break the ground surface. The only evidence on the ground were some superficial ground cracks.