Polar winds begin near the North and South Poles. Frigid air in the winter sinks toward the ground creating a high pressure area at the poles. These winds occur in both hemispheres. 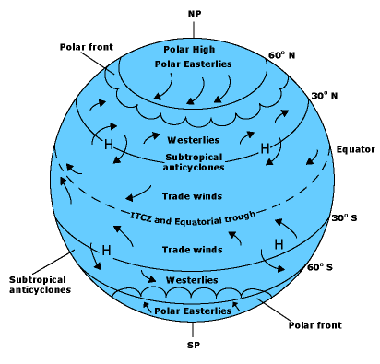 Approximately 60 degrees north and south latitude warm air is rising creating low pressure areas. Winds form as they more from high pressure areas near the poles toward the low pressure areas 30 degrees below each of the poles. You can see from the pictures that these winds blow from the East to the West. The winds are therefore called Polar Easterlies.

NASA's two satellites Terra and Aqua send imagery collected by the satellites to weather centers where they are using the data to calculate the speed, height and direction of the winds in polar regions. Arctic winter snowstorms often have high winds that carry snow from open areas to sheltered areas where it piles up. The highest winds speeds in the north are generally during the summer.

Temperature inversions can occur along the Pacific Northwest coast when cold polar air is trapped on the ground and warmer air moves in from warmer latitudes. The warmer air lifts over the colder air mass creating an inversion.

Inversions are caused by the separation of high level winds and surface winds in this region. Normally the air becomes colder as the height above the Earth increases. An inversion occurs when the temperature is much less than normal. The clouds just below the inversion layer spread out giving the clouds a flattened look.

A polar front is a boundary between cold polar air and warm tropical air. The east coast of North America is a polar front boundary with large differences in temperature between the cold snow-covered land and the ocean currents in the winter. Polar fronts move further south in the winter and shift northward during the summer months.