Tornado Scale was revised in 2007

The tornado scale was devised by Dr. Ted Fujita to categorize tornadoes. He based the scale on their intensity and area. He also wanted to estimate the speed of the winds inside tornadoes. In 2007 a new enhanced scale was introduced with the same five categories but wind speeds for each category have been adjusted. 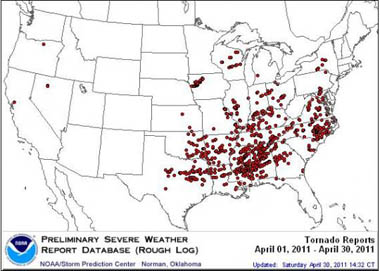 The enhanced scale (EF scale) was devised between 2000 and 2004. It was implemented on February 1, 2007. It uses the same numbering system as the original scale.

The big difference between the new and old scales is the wind speeds for each category. The new scale looks at the quality of construction of buildings when assessing damage and wind speed.

The old scale's F5 category wind speeds were between 261 mph and 318 mph. The new scale lowered the wind speeds to above 200 mph as category F5. Researchers found 200 mph winds were sufficient to cause the damage listed in the F5 category.

The new scale is similar to the old scale in most categories. The main difference is how structures such as double-wide mobile homes or strip malls withstand damage. Scientists have found that lower wind speeds can cause the damage that were once attributed only to higher wind speeds.