Asthenosphere, Layer beneath the lithosphere

The middle layer lies beneath the lithosphere and can flow like a liquid and break like a solid. The centrosphere, which is the central part of planet Earth, lies beneath the top two layers and goes all the way to the center of the Earth. 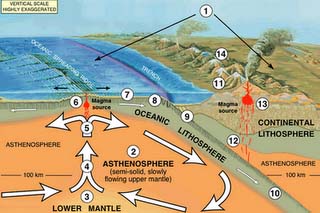 Scientists study the asthenosphere using seismographs that record earthquake waves. They have found that this layer's boundaries can be defined by the speed of earthquake waves travel through the rocks. P-waves and s-waves are produced by all earthquakes.

Scientists studying s-waves found that these waves slowed down at 100 km (62 mi) beneath the Earth's surface and sped up at 250 km (155 mi) within the Earth. Using these facts they discovered that the s-waves speeds define the upper and lower boundary of this section of the Earth.

Rocks in this layer

The rock material that makes up this layer is thought to be less rigid than the lithosphere. The temperature that rocks melt depends on the heat of the rocks and the pressure on the rocks. The higher the pressure, the higher the melting point of rocks.

It is believed that the rock material in this layer is just below the melting point. These rocks react similar to glass when it is molded by glass blowers into different shapes. The rocks can flow like a liquid and also break like a solid.

Crustal plates separating on the Earth's surface create lower pressure where the crust is thinning. This lower pressure allows the rocks to melt quickly and flow upward. If the plates actually break apart the molten rock (magma) flows onto the Earth's surface as lava. This occurs in areas where there are divergent plate boundaries usually found on the floor of the oceans.