Grimsvotn volcano is the most active volcano in Iceland. The volcano's caldera lies beneath an ice shelf that is 200 meters thick. The frequent volcanic eruptions by the volcano fill the caldera lake at its summit causing glacial outbursts when the icecap is suddenly lifted an a flash flood occurs. 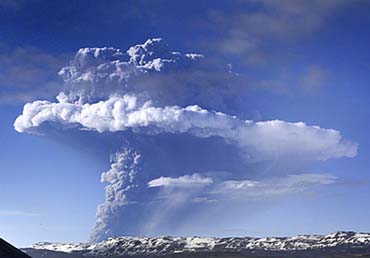 The last eruption began on May 21, 2011 when plumes of ash shot into the air. Multiple earthquakes indicated that magma (molten rock beneath the Earth's surface) was on the move. The ash cloud reached a height of 20 km (12 miles).

More than 900 flights were cancelled between May 22 and May 25, 2011. The Grimsvotn volcano eruption was 10 times larger than the 2004 eruption but did not disrupt nearly as much air traffic as the 2010 eruption on the island.

The eruption released 2000 tons of ash per second during the first 48 hours of the eruption. The ash particles were much coarser than the eruption the previous year on Iceland. Reykjavik, the capitol, which is only 120 miles from the volcano had large amounts of ash rain down on the city.

The ash was so thick in parts of the island that it turned day into night. The winds were light during the eruption and the coarse ash fell out of the air much more quickly than the 2010 eruption of the nearby Eyjafjallajokull volcano. It was the most powerful eruption of grímsvötn since 1873.

Often during an eruption of Grímsvötn a glacial outburst known as a jökulhlaup occurs. The molten rock melts the glacier above the volcano filling the 4 x 6 km long caldera with water.

The ice shelf lifts enough to allow the glacial water to flood valleys below. The last glacial outburst caused by grímsvötn occurred in 1996. No lives were lost because scientists monitoring the volcano closed a road before the jökulhlaup occured.

Scientists believe that new magma is moving into the system. They believe that the four eruptions in the last 15 years indicate the beginning of an active period of volcanism on the island is beginning. New eruptions can be expected every two to seven years if this is true.