Flood basalts cover large areas of continents and ocean floors. Three areas where these rocks have formed are the Columbia Plateau, Siberian traps and Deccan traps. The molten rock that forms these areas flows out of fissures in the ground. The fissures open up allowing huge quantities molten rock to flow out of the ground and flow across the land. 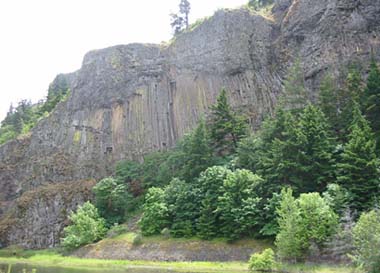 Flood basalts form layers of igneous rock covering thousands of square miles. Layer upon layer flows out of the fissures creating areas that are over a mile deep of solid basalt rock.

Basalt rocks in these formations are similar to lava in Hawaii. Pahoehoe lava is hotter and forms rivers of molten rock as it flows away from fissures on the sides of Kilauea and other Hawaiian volcanoes. This type of lava has a smooth and ropy surface.

Aa lava is slightly cooler and forms a rough crumbly surface as it slowly moves down the side of the volcano. Thick lava flows cool slowly and form columnar basalt with a polygonal shape.

The Siberian traps are located in Siberia, Russia. They formed during the Permian-Triassic boundary when 90% of the species on Earth died. The numerous flows of lava cooled to form step-like hills. The Swedish term (trappa), which means stairs was given to these hill formations. Scientists estimate that between one and four million cubic kilometers of basalt lava erupted from fissures to form the Siberian traps.

The Deccan traps are located in India. The layers of basalt rocks that formed in this region originally are thought to have covered an area the size of modern India. Over time erosion has reduced the size of the Deccan traps. Today they are approximately 6,500 feet thick (2,000 meters). Fossils found between the layers of lava include a toothed frog.

The Columbia Plateau is located in the Pacific Northwest. It covers parts of Washington, Oregon and Idaho. The lava flows cover approximately 63,000 square miles of land and are 6,000 feet thick. They lie between the Cascade Mountains and the Rock Mountains.

The Earth's crust in the region sank downward into the space that was emptied by the erupting lava forming a large basin. Today the area called the Columbia Basin is the same area known as the Columbia Plateau. Between layers of basalt people have discovered fossil leaf impressions, insect fossils, petrified wood and the bones of vertebrate animals.

All the terrestrial planets have areas where flood basalts have formed. The lunar maria that we see as dark areas on the moon are basalt lava fields that flooded the surface of the Moon. The maria cover approximately 16% of the Moon's surface.

Venus also has surface areas flooded with basalts that are larger than those found on Earth. Scientists hope to understand more about these geological events here on Earth by studying the surface of Venus and its volcanism.