The Earths mantle lies between the crust and the outer core of our planet. It is a rocky shell similar to Mercury, Venus and Mars. The mantle is 2,890 km (1,800 mi) thick. It is 85% of the Earth's volume and encloses the liquid core. The mantle is divided into the upper and lower mantle. 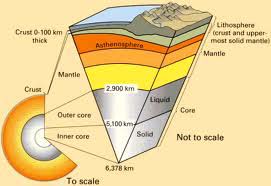 The upper mantle starts at the Moho boundary. This boundary was discovered by the Croatian seismologist, Andrija Mohorovicic. Earthquake waves travel at a slower speed prior to reaching this boundary.

The average depth of the crust is 32 kilometers and 8 kilometers beneath ocean basins. The irregular layer's maximum thickness is approximately 200 km. It was discovered in 1909. This boundary is the crust-mantle boundary.

These rocks contain a large percentage of olivine, pyroxene minerals and garnets. At depths of more than 400 kilometers olivine becomes unstable and recrystallizes into new rocks that are stable at the increasing heat and pressure. Below 650 km all the minerals become unstable.

The transition zone between the upper and lower mantle is at a depth of about 220 km. Inge Lehmann was the first to observe evidence of this boundary. The lower mantle reaches a depth of 2,890 km. where it transitions into the Earth's outer core.

Scientists study the changes in the minerals at these depths using seismic waves that are deflected and change speed.