Crustal plates cover the surface of the Earth. Large tectonic plates are named for the continents and oceans. Smaller plates are named for areas where they are located. For instance the Juan de Fuca Plate is located in the Pacific Northwest off the coasts of California, Oregon, Washington and British Columbia. 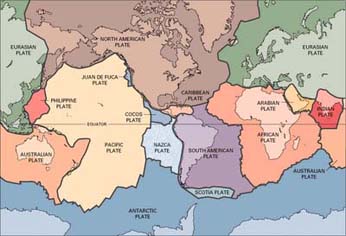 In the Pacific Northwest scientists sometimes refer to the Gorda Plate and Juan de Fuca Plate as two separate plates. Many geologists consider the two areas as a single plate and refer the entire area as the Juan de Fuca Plate.

The Cascadia Subduction Zone located in this area is constantly being monitored. On January 26, 1700 a great tsunami occurred that devastated the area and sent waves across the Pacific Ocean that crashed into Japan. The area has a potential of a devastating 9.0+ subduction zone earthquake similar to the December 26, 2004 earthquake and tsunami in the Indian Ocean.

In the middle of the Atlantic Ocean is a divergent boundary that separates North and South American from Europe and Africa. Each year the continents move slowly further and further apart. Iceland sits atop the Mid-Atlantic Ridge. Each volcanic eruption increases the size of the island as lava flows upward from the mantle and erupts from one of the fissures on the island or a volcano.