The Earths layers inside our planet are divided into three major areas. The areas are the lithosphere, mantle and core. Research carried out by seismologists since this original division have further divided the Earths layers based on the type of rock and speed earthquake waves travel through them. 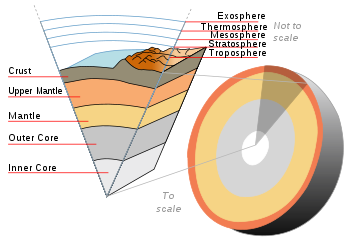 The lithosphere includes the crust and part of the upper mantle. This layer contains rigid rocks that move around the Earth about the speed our fingernails grow. The crustal plates as they move apart form divergent boundaries. Molten rock from the upper mantle flows out onto the Earth's surface forming new rocks on seafloors at divergent boundaries.

The continental crust in the lithosphere contains a high percentage of quartz and feldspar minerals. They are lighter than the oceanic crust which is made of iron-rich minerals found in basalt.

The upper mantle is primarily peridotite. Peridotite is an iron-rich rock that contains a high percentage of olivine. The mantle extends from the lithosphere to the core of the Earth. It is 2,890 kilometers thick and contains 84% of the Earth's volume. It is divided into the upper mantle and lower mantle. Pressure and heat cause the rocks to change in the two parts of the mantle.

At the top of the mantle rocks are part of the lithosphere which contains rigid rocks. At the Moho boundary the rocks change and become more like a plastic. They flow like a liquid but can also break apart causing earthquakes. Divisions in the mantle are based on changes in seismic wave speeds. Little is known about the lower mantle.

Beno Gutenberg, a German-American geologist discovered the liquid outer core of the Earth. Using information from seismograms he found that s-waves that only travel through solids stopped at 2,900km. Inge Lehmann discovered that solid core when studying earthquake waves traveling through the Earth after large earthquakes.

On August 30, 2011 Professor Hirose, at the Tokyo Institute of Technology recreated the conditions inside the inner core. He found that his observations strongly support the theory that the Earth's inner core is made of giant crystals running from north to south.