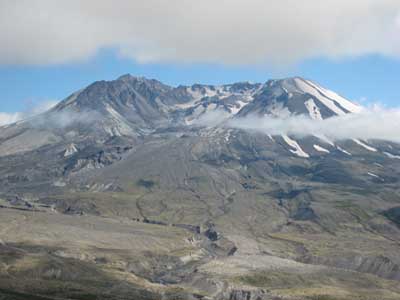 Stratovolcanoes are often dormant for hundreds of years between eruptions. The magma (molten rock underground) increases in size as the melting oceanic plate subducts beneath the volcano. Finally there is enough gases expanding in the magma to cause a massive eruption. The picture above shows Mount Saint Helens over 30 years after explosive volcanic eruptions devastated the volcano on May 18, 1980. The largest landslide ever recorded created the caldera with the dome volcano now growing inside. The explosive volcanic eruption sent pyroclastic flows down the side of sides of the volcano destroying everything in their way including entire old growth forests. The Johnson Visitor Center overlooks the caldera of the volcano that still shows the devastation that occurred during the eruption.

Composite volcanoes often alternate between violent explosive volcanic eruptions of lava flows. This alternating type of eruptions creates a framework to build to great heights. Examples of these volcanoes include Mt. Rainier, Mt. Hood and Mt. Fuji. The 1991 Mount Pintatubo eruption was the second largest eruption of the 20th Century. Mount Pinatubo is a stratovolcano that was considered extinct by scientists until it became active in 1991. It had been dormant for 400 years before the eruption.

The actual eruption occurred at a vent 6 miles (10 km) to the west of Katmai volcano. Later research revealed the volcano vent was centered at Novarupta volcano. They named a valley filled with pyroclastic flows the Valley of 10,000 Smokes because it reminded them of Yellowstone Park. There are five volcanic vents that surround Novarupta Volcano.

The Pacific Plate is surrounded on most sides by subduction zones. The subduction zones form a horseshoe shape. Most of the active volcanoes on land and great earthquakes occur here. The Andesite Line is the line between where composite volcanoes form on the continental plates and the submarine volcanoes and islands form inside the line. The Pacific Plate is growing smaller as the North American and South American plates override the Pacific Plate. The Atlantic Ocean on the eastern edge of these two plates has a divergent plate boundary that is pushing these plates apart increasing the Atlantic Ocean.

Ignimbrite are volcanic rocks that form when pyroclastic flows deposit volcanic material on the slopes and valleys around a volcano. Welded tuff is another name for solid rocks of ignimbrite that have welded together. Ignimbrite also contains volcanic ash, pumice, lapilli that may be loose and unconsolidated.