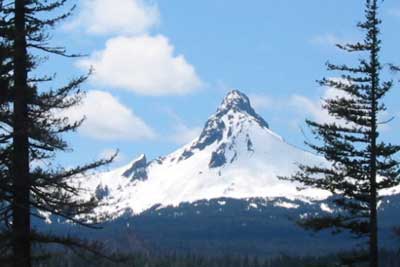 Mount Washington, a shield volcano in the Cascade Mountains

What are volcanoes that are created our of cinders?

Cinder cones are generally smaller volcanoes that form when basalt lava that is hot, fluid, and contains expanding gases in the magma erupts. The volcano starts when a crack in the surface of the Earth opens. Steam, gas and small walnut size pieces of lava rocks fall around the new vent. The eruption continues building a cone around the new volcano that is steep-sided. The entire mountain contains small pieces of lava that cooled and fell onto its slopes.

What are volcanoes that form a shield shape?

Shield volcanoes are volcanoes made of thin layers of basalt lava like cinder cones. The magma forms in the upper mantle and flows out in hot fluid lava flows. Each eruption forms a thin layer of lava on the volcano’s flanks. Over time the volcano forms a shield shape with a dome-like summit and broad sloping flanks. The Hawaiian Islands are examples of shield volcanoes that form over a hot spot in the ocean floors. Submarine volcanoes are shield volcanoes before they reach the ocean’s surface and form an island at their summit.

What are volcanoes that form in subduction zones?

Stratovolcanoes alternate between explosive eruptions and lava flows. Andesite is the predominate lava on the volcanoes. They can also erupt basalt, dacite and rhyolite at different periods in their history. Stratovolcanoes are extremely long lived and can go for hundreds of years between eruptions.

What are volcanoes that form a dome?

Dacite, a thick pasty lava, usually forms lava domes in the calderas of stratovolcanoes after an explosive eruption. Dacite is so thick and pasty the lava oozes out of the volcano vent and pushes older lava outward creating a lava dome in a caldera or on the slopes of a stratovolcano. Domes volcanoes are similar to lava domes but they form a single dome or in clusters of small domes that are not on the summit of flanks of another volcano.

What are super volcanoes?

There are 20 known supervolcanoes on our planet at the present time. Supervolcano eruptions occur only about once every 100,000 years. Lake Toba in Indonesia, Lake Taupo in New Zealand, and Yellowstone National Park in the USA are all supervolcanoes. The eruptions are so enormous they affect the climate and have damaging effects on the climate and the ecology of our planet. The Yellowstone calderas are so large that they are best observed from the International Space Station. Lake Toba and Lake Taupo are examples of large lakes that form in the caldera of a supervolcano after an eruption.

Are volcanoes active, dormant or extinct?

The Global Volcanism Program uses these definitions for active, dormant and extinct volcanoes.

Many people consider active volcanoes that are erupting at the present time. There are usually about 50 to 60 volcanoes that are erupting on our planet at the present time. Most of them are located on the Pacific Ring of Fire. Kilauea is an example of an active volcano that has been in almost continuous eruption since 1983. Stromboli volcano in the Mediterranean has been in continuously erupting for the past 2000 years. It is known as the Lighthouse of the Mediterranean because ships passing at night can see the molten lava erupting from its summit.

Dormant volcanoes are usually considered those that have erupted in the last 10,000 years but are not erupting at the present time. For example Mount Rainier in Washington last erupted in 1894 and 1895. It is considered a very dangerous volcano because it is so close to Seattle, Washington that pyroclastic flows or lahars could sweep down the mountain and kill a large number of people in their path.

Dormant volcanoes are thought to be volcanoes that will never erupt again. Listed prior to the 1990s was Mount Pinatubo. It had not erupted in such a long time that volcanologists that it was extinct. It awakened in 1991 and when it erupted during a typhoon it was the 2nd largest eruption of the 20th Century. Stratovolcanoes eruptions are often hundreds even thousands of years apart.