Mauna Loa volcano is located on the island of Hawaii with four other volcanoes that make up the island. Loihi is a seamount that is growing just off the coast of Kilauea that is the newest member of the Hawaiian Volcanoes chain. The island sits above the Hawaiian hot spot that feeds the three active Hawaiian volcanoes on the island. 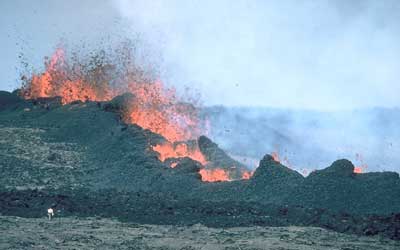 The Hawaiian hot spot is located in the middle of the Pacific Ocean plate that has been there for millions of years. As the Pacific Ocean plate slowly moves northwestward relative to North America and other hot spots beneath the plate the plume of molten rock has created a string of submarine volcanoes that reach from Loihi north all the way to the Aleutian Trench. The Hawaiian-Emperor seamount chain is over 3,600 miles long. The Hawaiian ridge is the southern section where the islands of the Hawaiian chain have formed. They are the only volcanoes that reach above the surface of the ocean in the chain.

Mauna Loa is one of the most active volcanoes on our planet. It is also considered one of the most dangerous. The volcano has two cycles to its eruptions that are unique to Mauna Loa. The volcano will erupt from its summit for 1,500 to 2,000 years then it switches to fissure eruptions on its flank. Typical of all Hawaiian eruptions they are considered quiet because of the hot fluid basalt lava they erupt. At the start of an eruption lava fountains known as curtains of fire blown into the air along a rift in the volcano that is several kilometers long. Over time the eruption flows from a single volcano vent. Mauna Loa does not erupt as often as Kilauea but it erupts a greater volume of lava during a shorter period of time.