Submarine volcanoes dot the floor of the Pacific Ocean basin. The Hawaiian Islands sit over a persistent hot spot that has formed a chain of submarine volcanoes that reaches all the way to the North Pacific Ocean. Off the coast of Alaska is the Patton Seamount that originated off the coast of Oregon over a persistent hot spot. When grow large enough to rise about the surface of the ocean they become islands. 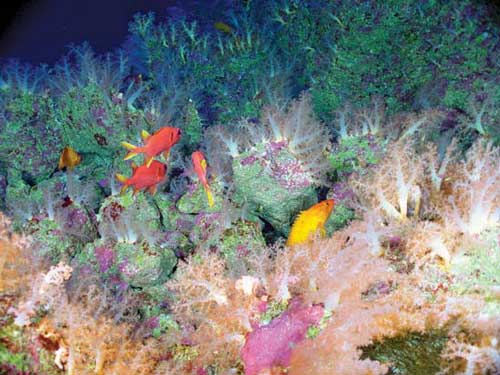 The Pacific Ocean basin is twice the size of the Atlantic Ocean basin. It is moving northwest relative to the North American Plate. The Hawaiian-Emperor seamount chain is an underwater mountain chain for submarine volcanoes that formed over the hot spot that today is beneath the Big Island of Hawaii. Three volcanoes are still active on the Big Island of Hawaii. The other two are dormant volcanoes that have moved far enough away from the hot spot and will not erupt in the future.

Loihi is the newest member of the Hawaiian Island chain of volcanoes. The island is approximately 35 km off the SE coast of the Big Island of Hawaii. It has an elongated shape due to the two curving rift zones on the flank of the volcano that runs north and south from the summit. A caldera at the summit of the volcano is 3 by 4 kilometers wide. Numerous lava cones have formed inside the caldera. The highest of the cones is 975 meters above the floor of the ocean. Earthquake waves beneath Loihi indicate that it has its own distinct plumbing system that is separate from Kilauea volcano.

The East Diamante submarine volcano is part of the Mariana Arc Volcanoes near Guam. The Aquarium pictured above is located on the summit of East Diamante volcano. Sea life in the photo includes red and green algae, soft pink corals with white stalks and tropical fish. This lush community of plants and animals not typical of plant and animal life around most thermal vents. The volcano’s summit lies within 127 m of the ocean surface.