The official death toll was placed at 36,417. Some estimates place the death toll at over 120,000. People killed by tsunamis sweeping over low-lying islands carried people out to sea where some of them floated on the oceans for over a year. There are reports of skeletons floating on debris from the eruption coming ashore in Africa a year later. 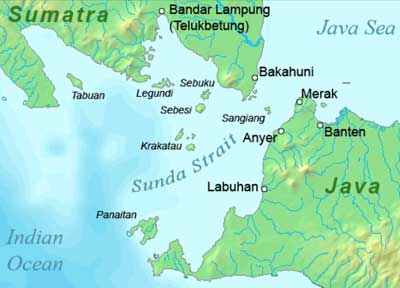 There were three explosive volcanoes that made formed the island of Krakatoa in 1883. Perboewatan, was the northern most volcanic cone. It started to erupt on May 20th. By the 24th of June ash from the eruption reached 20,000 feet (6 km) during the eruptions.

August 11, a Dutch engineer, investigated the islands and reported back that Danan, the middle volcano cone, had started to erupt. Between Perboewatan and Danan two new volcano vents opened up and were also erupting. He also reported that he could view eleven new volcanic vents that were in erupting ash and pumice during his investigation. The eruptions continued into the middle of August with volcanic activity all over the island.

The August 25th a black cloud of ash blew into the air 17 miles (27 km) high. The volcano vents on the island were almost continuously erupting and explosions could be heard every ten minutes by nearby ships. Pumice up to 4 inches (10cm) in diameter fell on the decks of the ships.

Four enormous eruptions occurred on this date that destroyed almost two-thirds of the island during the Krakatoa Eruption. The eruptions triggered large pyroclastic flows, tsunamis and a large landslide.

What is a tsunami?

A tsunami is a large ocean wave that travels through the oceans at about the speed a jet plane flies. They are generated by large earthquakes, landslides or during a volcanic eruption like Krakatoa when pyroclastic flows entered the ocean. The first tsunami struck the shores of Java and Sumatra 25 miles (40 km) away on August 25th.

What is a pyroclastic flow?

The 1883 pyroclastic flows entered the oceans and were carried across the surface of the oceans on superheated gases until they reached land destroying everything in their path. There is also pyroclastic flow debris that was found on the ocean floor that travels through the water for 9.3 miles (15 km).