The Pompeii eruption occurred in AD 79. Watching the eruption was a 17 year old nobleman, Pliny the Younger. He was living across the Bay of Naples in Misenum. The town was just only 13 miles (21 km) from Pompeii, He was living with his mother and Uncle, Pliny the Elder. Pliny the Elder was the naval commander of the Roman fleet at Misenum. Pliny the Younger wrote two letter to Tacitus, the historian, relating accounts about the eruption. The two letters he wrote are the only known records of what happened during the eruption. One letter contained information about the eruption from survivors. The other letter told of his observations of what he did and what he saw. 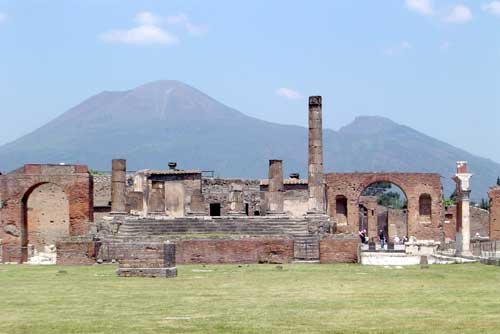 Pompeii with Vesuvius in the background

Life in Pompeii and Herculaneum prior to the eruption

Pompeii was located on the west coast of Italy and was a favorite vacation spot for wealthy Romans. Herculaneum was a nearby town that was also a vacation area for Romans. Numerous earthquakes shook the area around the volcano in early August. There were so many earthquakes that people had became use to them and were not worried enough to leave the towns.

Seventeen years before a major earthquake had shaken Pompeii causing harm to the springs and pipes that provided water to the town. Some buildings were damaged and were being repaired on those two faithful days in August when explosive eruptions from Mount Vesuvius killed everyone living in the two towns at the time.

The Pompeii eruption began on the morning of August 24th with a Plinian eruption that scientists believe blew ash into the air between 49,000 and 98,000 feet (15-30 km) high. Pliny the younger described the cloud as looking like a tall Mediterranean pine tree. He describe the eruptive column that looked like the trunk of the tree and at the top of the ash column it spread out like the branches of the tree. The name for this type of mushroom shaped cloud of ash is called a Plinian eruption after the letter describing it by Pliny the Younger.

The temperature of the ash and pumice that fell on Pompeii was between 248-284 degrees Fahrenheit (120-140 degrees Celcius). People living in Pompeii could have escaped that first day while the ash and pumice rained down on their town. That was the last chance for them to escape

Two pyroclastic flows destroyed Pompeii the next day. There were no survivors that escaped the town on the second day. The first flow that swept through Pompeii contained gases and pyroclastic material that reach temperatures between 356-428 degrees Fahrenheit (180-220 degree Centigrade). The second pyroclastic flow came later and the material in this flow was approximately 75 degrees hotter than the first pyroclastic flow.

No one knows how many people died in Pompeii and Herculaneum during the eruption. Much of the area today still has not been excavated.